This evening on my way home against a lovely near midsummer Finnish sunset, a robot politely asked me to help it cross the road.  Our campus area at Otaniemi is host to a pilot of food delivery robots by Starship, they are modest, oblongs on wheels, probably deliberately not made too humanoid or science fictiony, more like a shopping trolley on wheels.  They even have a little orange flag on a pole sticking up at the back, like the child carrier fixed to my bike, to be seen by traffic. 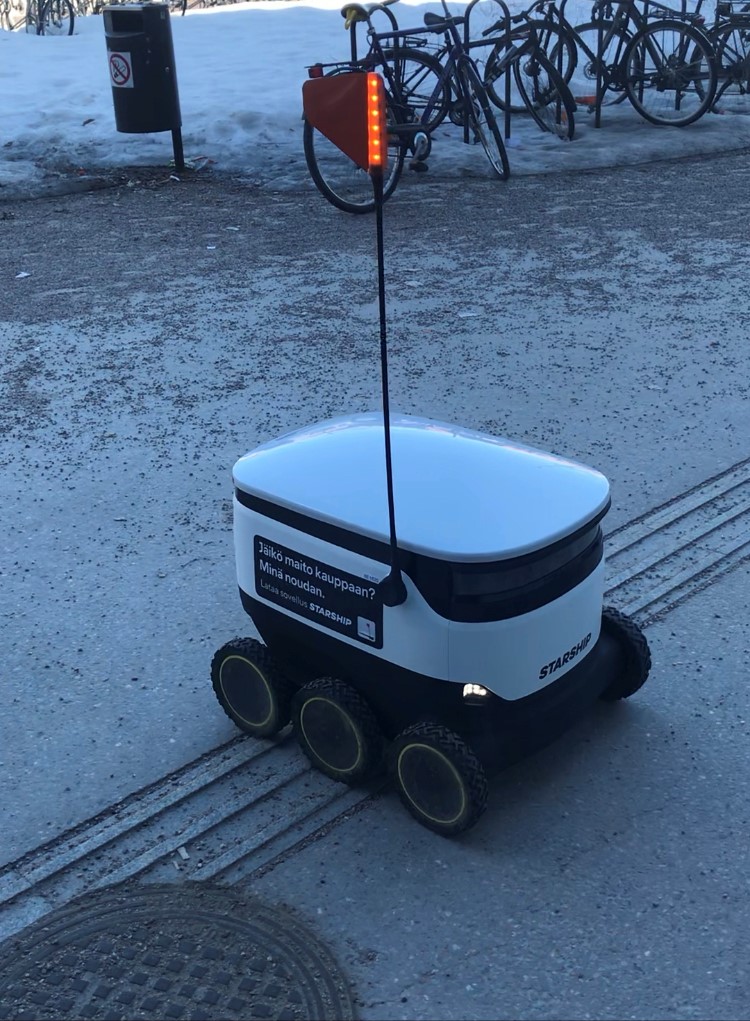 They have become a normal part of life in Otaniemi already.  At first they were a novelty: students would stop to inspect them, children would shout “ROBOT” and gather round. When I took my son around the mall at the campus centre, he would try to interact with them, and so “don’t bother the robots, they’re working”  became part of our family chatter.  I accosted the product manager at a demo at the local supermarket and demanded to know if the robots would back down if they met someone in a wheelchair or with a pram in a narrow street (“ye-es” he said warily, and for now at least they are not a presence to resent if you have limited mobility, unlike abandoned e-scooters).

At first they got stuck at the traffic lights: white boxes on wheels with a twinkly orange flag and an AI paid for by millions of Silicon Valley dollars, but no arms to press traffic light buttons.  In Otaniemi after 10pm, both human and road traffic quietens down a lot, so some robots got stuck for half an hour.  They made it into the news.  Silly robots.

It is quite sweet to watch our local humans interact with the robots.  I have seen a young man cycling to a lecture stopping to press the traffic light button to help out a stuck robot, I have seen a pair of young women stopping to help one stuck in the grit that was left covering the streets after the winter ice had melted away.  I saw a robot this evening – possibly the same one that asked me for help later – riding tilting along the curb, wheels of one side on the pavement, other wheels along the road.  I watched it, it’s little orange traffic flag twinkling in the evening sun, half on the road, and I wanted to help but I stopped myself.  “It will never learn unless you let it work it out itself,” my mother voice sighed.  “And it is more on the pavement than the road, it’s quite safe.”

I was cynical when I first heard about these robots.  My husband showed me a picture of a robot and my London self said that’s going to get facking nicked, mate.But so far they seem not nicked, not vandalised, just a new robot on the block.  Overall, humans want to help the robots.

The robot this evening asked me politely in Finnish to press the traffic light button for it, and I did, narrating what I was doing because I wasn’t sure what it could see.  Then I realised this was one of the new traffic lights put up in the roadworks, it probably exists in the map that the robot’s programmer was given, but it doesn’t actually work yet.  So I said “look, you’re just going to have to go across the road, there are no lights.”  And I didn’t know if there was a human listening who had taken control, or if it sensed and processed my language, or it just took an algorithmically determined chance, but off it trolleyed across the road.  I was left with so many questions. Did you hear me?  Did a human hear me?  Did you use a Finnish woman’s voice because a lens looked at me and a computer saw a Finnish woman, what would you have sounded like to my husband?  Would you have asked my children for help?  But the robot had its job to do, and its interaction with me was over.  I watched it roll away into the sunset, until it veered slightly off the path and got stuck in some grit.   I can’t help it,  I said to myself.  It’ll never learn about grit until it works it out itself.

Personal reflections on sustainability, citizenship, and the loves of my life.